From a towering skyscraper to a miniature fairy garden, a structure’s scale has major impact on how we respond to it. It’s more than just size: scale incorporates proportion, distance, and boundaries into a cohesive experience.

Playing with scale is the difference between making your audience feel trapped or inspired. In this episode, travel to Kohl Children’s Museum, where pint-sized patrons dictate exhibit design for maximum engagement. Learn how taking your audience’s perspective into consideration will result in more engaging spaces.

Here are some links related to the research and discussion:

Was the Spinal Tap Stonehenge scene a matter of art imitating life?

Have you noticed how amusement parks use forced perspective? 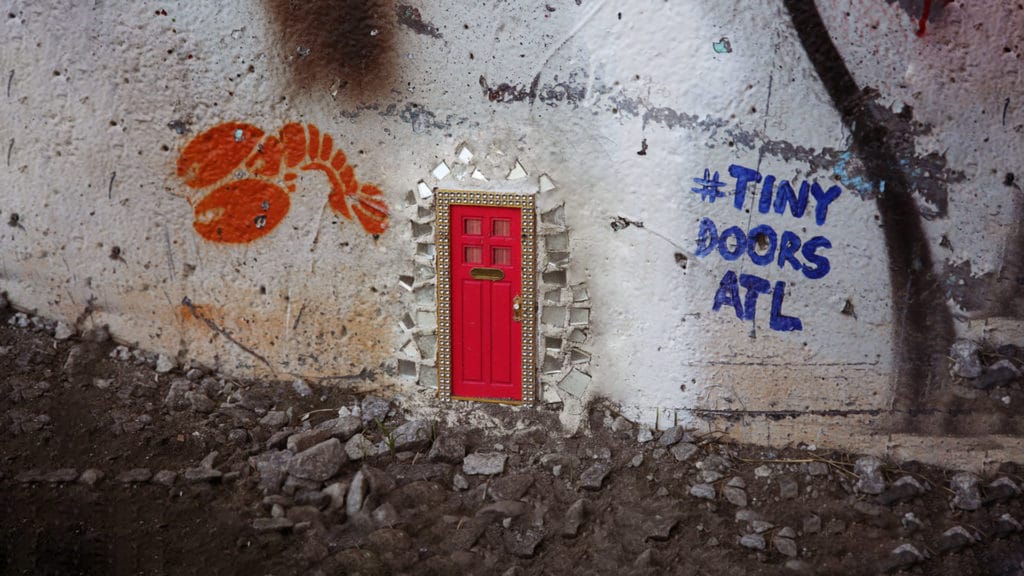 Over the past 20 years, Sheridan Turner has become a leading authority on museum educational programming and operations. For the past 10 years, she has lead Kohl Children’s Museum through significant change and growth, opening a new and expanded Museum in Glenview in October 2005. In July 2008, Sheridan successfully completed Harvard Business School’s prestigious executive leadership training program, Strategic Perspectives in Not-for-Profit Management. She holds a master’s degree in Early Childhood Education and Instructional Leadership from the University of Illinois at Chicago and received her undergraduate degree from Norwich College, England. Active in the community, Sheridan serves on the Board of Directors of Cove School and the Glenview Chamber of Commerce. She also is a member of the Governor’s Early Learning Council.

“..So it’s ignited this different level of imagination. They’re not afraid to go in that small space. They’re going to fill it in their own way with their imaginations and make it bigger than it really is.”

(Adam Voss) I’m reminded of a classic scene in the iconic mockumentary This Is Spinal Tap. In this scene, our protagonists, the hard-rocking members of the delightfully perverted English heavy metal band, are on stage dressed in flowing, black Druidic robes, playing the introduction of their epic ballad, Stonehenge. And as they approach the bridge of the song, a dramatic mandolin solo cues a pair of little people dressed as elves to take the stage, as a scale replica of the classic, mythical hot spot Stonehenge simultaneously descends to the stage as those elves dance around it. And, oh, how they danced those little children of Stonehenge. But unfortunately, due to a miscommunication, the scale replica of Stonehenge turns out to be far smaller than the little people dancing around it. If you’ve seen the scene, you know exactly what I’m talking about. And [laughs] instead of 18 feet high, their Stonehenge prop is only 18 inches high, making the band a laughing stock on stage. And while you’re laughing hysterically at the scene, take a second to think about how incredibly important scale is to how we lowly human beings interact with the world around us.

I looked it up. Scale is the ratio of the linear dimension of a model to the same dimension of the original. And scale relates to human perspective. But what does scale mean in the world of tradeshow and exhibit design? And how can we scale back the pitfalls and the blunders of our dear friends from Spinal Tap while tapping into success? The answer to this and other questions, both big and small, is why we’re here today, as today’s podcast focuses on everything scale.

Hello, and welcome to Echelon’s 12 for 12, a series of 12-minute podcasts created to inform, entertain and hopefully inspire creative individuals. And my name is Adam Voss. I’m a comedian, professional emcee, Spinal Tap fan and fellow marketing and design geek, and I will be your host for the next 12 minutes.

Our topic today is scale. And in a design world, scale is defined by the relationship we, humans, have with the real world. So today, we’re going to get real and start small at the Kohl Children’s Museum of Greater Chicago. 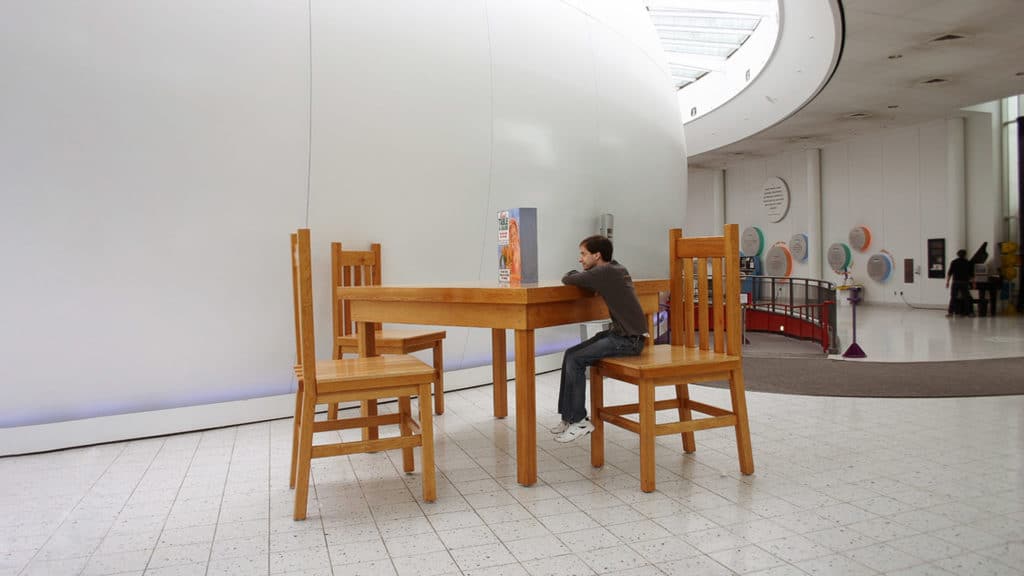 Today on 12 For 12, I’m talking to Sheridan Turner, the President of Kohl Children’s Museum in Glenview, Illinois. Thank you for being here, Sheridan, and welcome to the show.

(Sheridan Turner) Thank you for having me.

(Adam Voss) So I have been a fan of the Kohl Museum for many years. And I am interested to kind of get your take on scale and perspective with regard to kids and interacting in different spaces. So do you, in this museum, witness kids interact differently with spaces that are designed for smaller bodies versus how they deal with the real world, the big world?

(Sheridan Turner) Very much so because children need boundaries, and if you put a small child in a huge cavernous space, they’re immediately, “Where is my limitation? Where is my boundary?” And they’re either going to go take off at full tilt and try and fill it —

(Sheridan Turner) –and find out where the edge is, where the perimeter is. Or they’re going to become very shy and hide behind an adult and not want to explore because it’s overwhelming to them. So in the museum, what we have done is taken great care to create environments that are scaled to a child’s size. And a great example of that that’s very easy to comprehend is the grocery store.

(Sheridan Turner) Actually, the children are in control of the prices. And to be perfectly honest, I don’t think I can afford to shop here.

(Adam Voss) Do you think the larger exhibits, do they instill a different sort of emotional response? I mean, is it grandeur? Is it fear? Or, you know, because if they see something big, is it more eye candy for them?

(Sheridan Turner) Well, it just becomes very overwhelming to them because when you think of a child’s peripheral vision —

(Sheridan Turner) –it’s just too much for them to take in. And a great example of that is we brought a life-sized Barney into the museum one day, thinking, “Oh, the kids are going to love it.”

(Sheridan Turner) The purple dinosaur. They were petrified.

(Sheridan Turner) They’re used to seeing this thing on a TV screen so it’s tiny.

(Sheridan Turner) But as soon as that purple dinosaur was towering above them, it was like —

(Adam Voss) Even before he sang?

(Sheridan Turner) Even before he sang. And they knew who it was. You know, parents were going, “But its Barney.”

(Adam Voss) So what’s the age?

(Sheridan Turner) Well, the age group is birth to eight.

(Sheridan Turner) But the sweet spot is probably two to six that I hear most of the time. But the exhibits will accommodate different learning levels of children. Just because you’re a two-year-old doesn’t mean to say every two-year-old is doing exactly the same thing. Two-year-olds learn in different ways. They learn at different paces. I mean, you all know some children crawl and then walk. Some children never crawl. They go straight to walking.

(Adam Voss) So how do you create an exhibit or display that plays to the birth through the eight-year-old?

(Sheridan Turner) Well, first of all, we think about scale, which this is all about, and making sure that things are relatively sized to accommodate our little ones, our younger children. And then it’s having different activities in those exhibits that each child can engage with. For example, we’re now creating Built It, which is a new block exhibit. And there will be smaller blocks in there that an infant can manipulate, and they’re using sensory motor to try and pick it up. Not small enough that they can swallow it and have a choking hazard.

(Sheridan Turner) And then at the other end of the spectrum, you’ve got these big, blue blocks that your older kids can now — they’re at a different level of play. They’re actually creating things. I was watching some children the other day, who had just moved. They’d just moved house. And so they built the house. And then they said, “Oh, we need wardrobes, and we need closets.”

(Sheridan Turner) “We have to have somewhere to put our clothes.” Because apparently where they moved to was very short on closets. And there was also a plumbing issue so they built the plumbing.

(Adam Voss) So you see that narrative played out.

(Sheridan Turner) You see the narrative played out as the children are figuring out everything they’ve just been through. And so the older children are now into this very dramatic area of play where they’re interpreting the world. It’s much more of an interpretive level of play through the blocks. So the blocks become replications of what they’re trying to comprehend.

(Sheridan Turner) Whereas with the little one, they’re still figuring out, “How does my thumb and forefinger work together to make it so I can pick that block up and put it where I want it?”

(Adam Voss) In my mouth.

(Sheridan Turner) In my mouth.

(Sheridan Turner) Yes. And the next stage is they’ll put one block on top of another block. Does it stay there? Maybe yes, maybe no. And then they smack it, watch it fall down, giggle-inducing play —

(Adam Voss) And we do it at the bar. It’s called Jenga. [Laughs]

(Adam Voss) Right. In our proxemics episode last month, we had a guest expert that was saying adults resist spaces that can be construed as confining. Do you find the same to be true with children?

(Sheridan Turner) Panic attacks. No. Children will go and explore as long as the overall environment feels safe to them. They love to explore little nooks and crannies and see what’s poking around in there, see if there’s something else they can go play with. The Books and Crannies Exhibit that we just totally redid.

(Sheridan Turner) On the upper level, we’ve got this glass domes that the children can crawl into. And our idea was that kids will go in there with a book and, you know, look at what’s going on in the world around them. And they’re nice, small, cozy spaces so you’re comfortably cushioned in this nice round dome.

(Sheridan Turner) No, I’ve seen children turn it into a spaceship.

(Sheridan Turner) So it’s ignited this different level of imagination. They’re not afraid to go in that small space. They’re going to fill it in their own way with their imaginations and make it bigger than it really is.

(Adam Voss) Right. And now Books and Crannies also has a coffee bar?

(Sheridan Turner) It’s a coffee bar. It’s a spaceship. What else have I seen it as?

(Sheridan Turner) I’ll have to go down and see what the kids are making it today.

(Adam Voss) Well, I want to go down and play in the museum. Thank you so much for joining our show today. It’s been lovely talking with you.

(Sheridan Turner) Well, thank you for coming to the place where awesome lives.

(Adam Voss) Thanks again to Sheridan Turner and the Kohl Children’s Museum of Greater Chicago for letting me spend the day pretending I am four years old and playing with other kids that also pick their nose.

That’s our show for today. Join us next time when we dive deep into the matrix and Keanu Reeves. No, he will not be here. But we’ll discuss how to build a tangible brand from the physical world to the virtual one, leveraging social and integrated media. And we’ll come to discover that in the world of exhibiting, bytes and bits are just as important as nails and screws. So for a complete recording of today’s podcast, equivalent dives in our other engaging episodes as well as extras, go to iTunes or listen online at www.EchelonDesignInc.com. Thank you for joining.