360 video: a must for every marketer

Moreover, it’s in three (three!) dimensions. If you have—as many of us have—fallen subject to excessive screen time and grown used to a smaller, flatter, more rectangular view of the world, then you might be excited to learn about new places those screens are going to take you.

As video continues to dominate online content and virtual reality viewers are increasingly accessible (I mean, this one’s literally made of cardboard, purveyors of digital content are becoming interested in stories that exist outside of a phone screen. 360° cameras are helping to make this possible.

You may be familiar with Google Street View as a helpful reference to this type of tech. What we see with this immersive extension of their Maps platform is MANY captures from 360° cameras stitched together allowing users to click and pan through different views of their city. Interiors and exteriors are captured by Google and sourced from users to help you plan an upcoming trip, explore a neighborhood across the country before moving, or scope out the best table for your forthcoming JDate. It is this type of experience that modern producers are creating; however, some of the new work out there leaves Street View feeling like a lenticular stereoscope (VR history burn!). 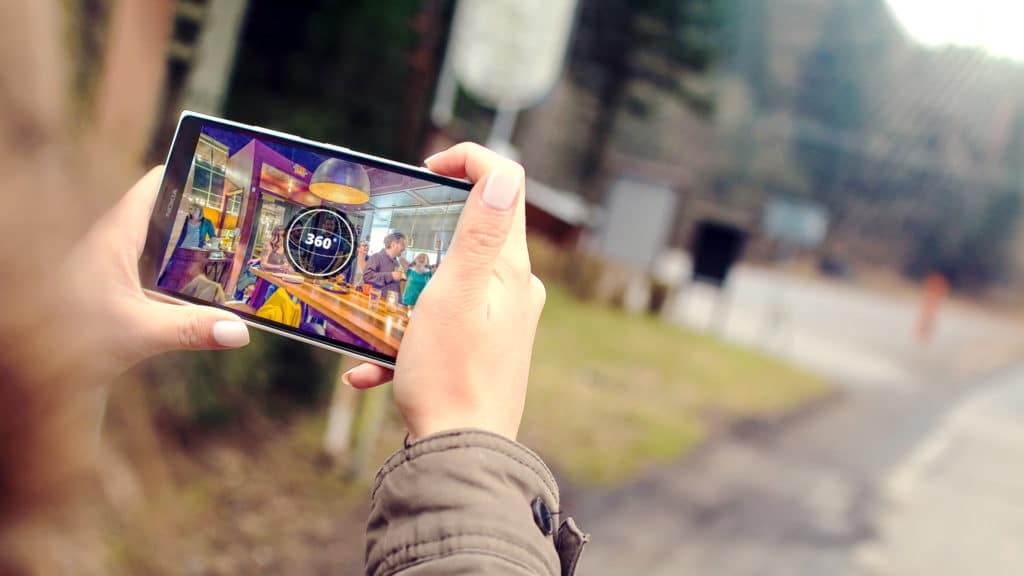 Still unclear on what we mean when we say 360° content? Specifically, we’re talking about media created using omnidirectional vantage points; either, one fixed camera with multiple lenses to capture its surroundings (see: RICOH THETA or the Kodak PIXPRO or a rig mounting multiple cameras together (see: GoPro’s Omni and Odyssey, Nokia’s OZO, or Facebook’s open source Surround 360. The goal here is that the fixed position of the camera, rig, or “viewer” is the only spot that can’t be seen, as each of the shots is stitched together through some very clever pieces of software.

There are different levels of engagement based on the content and the manner through which you’re processing it. Clicking and dragging to view 360° areas on a 2D surface only offers a fraction of the tech’s full potential. A step up from this, notably wide-spread through Facebook’s 360 Photos, is physically panning around virtual space “viewed” through your device. This is where software accesses your phone or tablet’s gyroscope and displays media responsively. You pan up, the image you see on the screen pans up; you tilt or roll, the image tilts or rolls. It’s pretty cool and gives the immersive sense of looking into that 360° world through your device.

The next step is taking off the training wheels and just viewing the digital content. At this stage, think VR headsets that use your phone or a screen connected to a gaming system or PC. Your eyes and ears are covered as you transport to a new world; sights and sounds adjust while you move through a virtual environment, creating, ideally, a seamless sense of presence. If you did any holiday shopping this year or followed CES, you’ve been gleefully inundated with the MANY steps forward this tech has recently taken. Lower costs, greater comfort, and improved performance are bringing 360° content via VR into the mainstream, and marketers not using these tools need to at least possess a comfort with the language and capabilities of what may well be the next tech horizon.

I encourage you to dig a bit into how creators are using this technology and where the gaps are. Much of it is being used for simple demonstration right now, accessing, at its most basic, 360° content’s ability to offer a full view of a space or a thing. Echoing Jackie Kennedy’s famous televised tour of the White House, the Obamas last year gave a virtual tour of the space on their Facebook page with 360° tech. Discovery’s YouTube channel has been churning out great content including an experience swimming with sharks through an underwater shipwreck, and VR production house IM360 takes you across the entire planet in an epic introduction to their services.

Even simple videos showing off your product or service as an exploration of 360 can be impactful. An obvious advantage for your fans here is providing them the opportunity to be somewhere they otherwise couldn’t. This technology allows a level of access that goes beyond novelty into the realm of unique and memorable. And though there is not a lot of solid data yet, it is reasonable to conclude that just as product demonstration videos have an enormous impact on buyer conversion, so too will engaging content at this level. When consumers have not only explored your brand, but authentically felt they’ve experienced it, imagine what an impact that could make.

Beyond just sharing captured content, 360° video is also great served live. As YouTube, Twitter, and Facebook have begun offering 360° live streaming and cheap, social-friendly tools like Giroptic iO and the Insta360 Air help you stitch and stream on the go, this sort of content is surfacing everywhere. Live interactive content can take conferencing or a product demonstration to the next level, and consider its potential at an upcoming event or the next time you want to share exciting company news. The New York Times began using 360 video extensively for reporting, as has Vice News, and live performances and sporting events have long been using this tech to provide remote audiences an added layer of connection.

But perhaps most exciting with this tool—and where marketers are currently struggling the most—is its potential with immersive storytelling. Narratives in an environment like this are tricky. When viewers have so many options to explore in a virtual world, how best can you plot out and share your story? Then, how does their choice impact story direction? Or, what happens when viewers miss visual cues you provided because they’re trying to zoom in on the sun? Many are looking to gaming and other long-time creators of VR to help here, but for marketers there’s much yet to figure out. AT&T and TOMS do an admirable job with their “A Walk In Their Shoes” film, as does the Guardian with their “6X9” virtual experience of solitary confinement. Both blend the ability to pan through interesting areas with more “directed” moments where the point of focus automatically moves as attention is called to a specific character or place in the environment.

With some of these examples, though, it feels like asking too much of an audience so used to just watching and untrained to participate further. When we can’t get consumers to watch a video that doesn’t autoplay in their social stream, how can we get them to watch one that requires a costume change? Plus, slow frame rate or bad resolution can really mean death for one of these videos. Without a doubt, winning at the narrative will be the name of the game in the coming year.

It is said that art imitates life, and I think the same could holds true with technology. As we innovate and seek to create worlds more and more like those in the real world, we should feel a responsibility to do so in a way that is both honest and inspiring. At the risk of overstatement, this shift to 360° content and virtual experiences could be the shift that characterizes this generation of thinkers and makers. Make sure you’re ready.